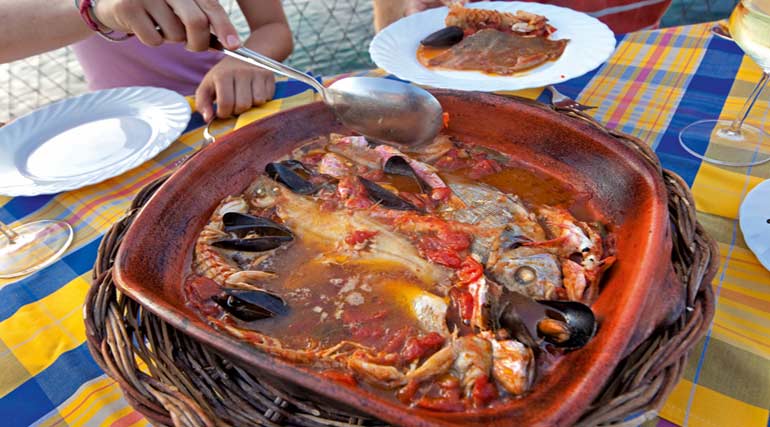 Brodetto is a fish and tomatoes soup, a meal originally associated to life on board, it is considered a culinary symbol of the Adriatic coast.
In the past fishermen used to prepare brodetto with the leftover of their fishing after having sold the best part of the catch. Brodetto used to be cocked on a copper casserole, the ingredients were: sea water, olive oil, onions, garlic, red hot chilli peppers. When the sea water was boiling it was the moment to add the fishes: mullets, cods, soles, squids, octopuses, shellfishes and other local fishes. The tasty sauce obtained used to be poured over slices of bread, as well as the fish. At the beginning, brodetto used to be prepared without tomatoes, only occasionally some fresh tomato was added; eventually this dish has evolved and now it is one of the most delicious dishes of the Adriatic coast, especially of the area of Termoli and Vasto. Nowadays the three most important elements for a perfect brodetto are: good olive oil, red hot chilli peppers and earthenware pan. In the Molise and Abruzzo region the tradition says that the fishes used to prepare brodetto have to be very fresh, no less than six or seven different types and rigorously caught locally. The fishes used are: rays, mullets, squids, octopuses, shellfishes, cods, and other local varieties of fishes. Other ingredients apart from the fish are: garlic, fresh chopped tomatoes and red hot chilli peppers.
This dish that seems very simple needs a very accurate preparation, in fact the fishes do not have to be put on the pan together, but one by one, according to their cooking times, so that they will be ready all together after 20 minutes. To achieve a perfect result the fish do not have to be turned while cooking, the pan has to be delicately shacked and rotated in order to mix and stir the ingredients. 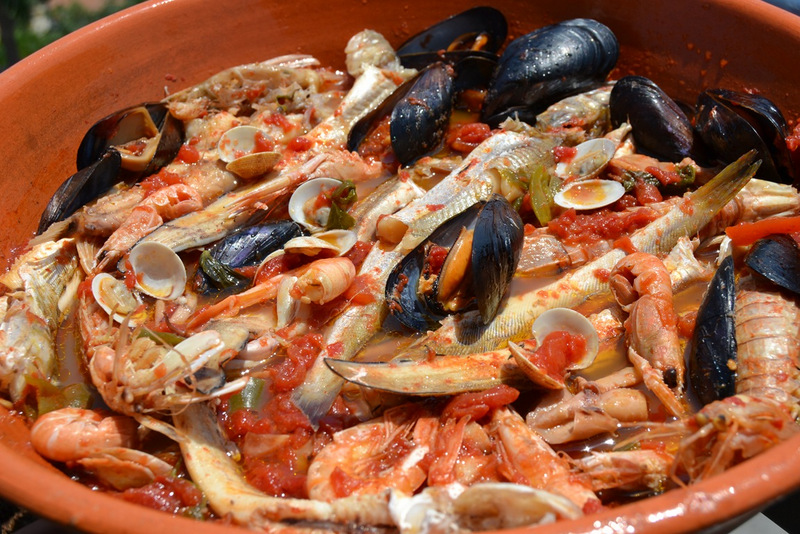 – The fish has to be very fresh and caught locally. The varieties of fish used can vary according to the season, or according to the daily caught, but the fish must be local.  – First of all, to prepare a brodetto clean the fishes.

– The biggest fishes can be cut, while the smallest do not need to be cut.

– Pour the extra virgin olive oil on a earthenware pan, add the red pepper and the tomatoes previously chopped, the parsley, the garlic and some basil leaves.

– Serve the brodetto when is very hot. 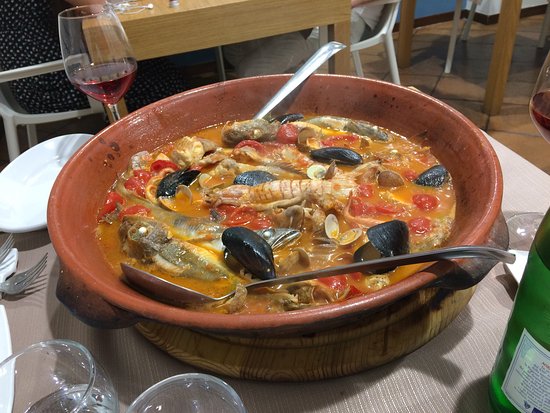 Below some fishes for