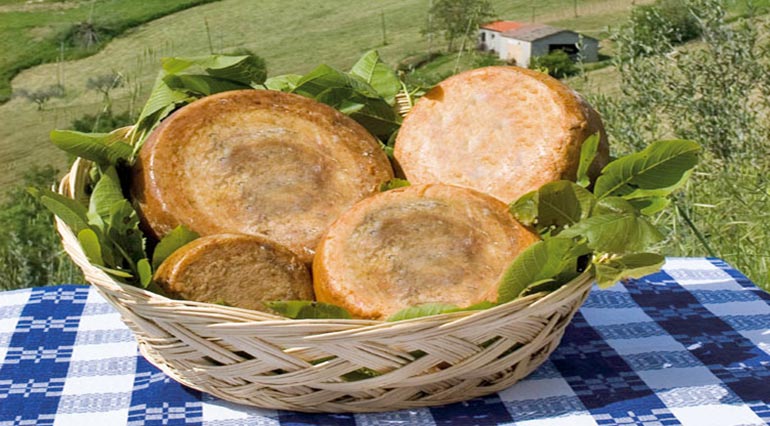 “Pecorino di Farindola” is undoubtedly one of Abruzzo’s most distinctive cheeses, typical of a very limited area that partly includes some of the mountain communities of Vestina and Cermignano, on the border of Pescara and Teramo provinces, below the eastern side of the Gran Sasso mountain: Farindola, Penne, Montebello di Bertona, Villa Celiera, Carpineto della Nora, and Civitella Casanova in the Province of Pescara, Arsita and Bisenti in the Province of Teramo. 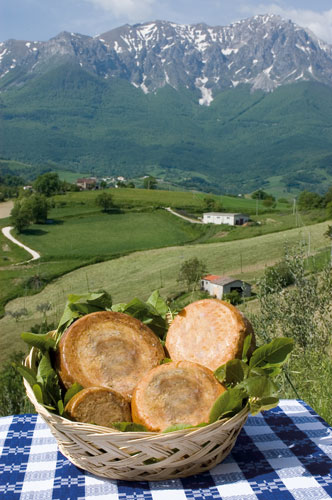 This is compact, semi-cooked crumbly paste cheese, made from ewe’s milk. This Pecorino is unique in its use of pig rennet, which gives the product its typical aroma and taste. Preparation of the liquid pig rennet entails taking mucus membrane from the pig’s stomach, well washed and cut into narrow strips and kept in dry salt for 2-3 days. Next, it is put into a dark glass container to steep, with a mixture of white vinegar and white wine, with the addition of chilli pepper and, sometimes, a few grains of pepper. The membrane is left to steep for at least 3-4 months. The rennet is filtered through a sheet of white linen for at least 5-6 days before use and kept out of the light. The cheese is made by first filtering the milk into a cauldron to remove any impurities. The milk is then heated to 36-37°C and sometimes whey or starter cultures may be used to improve acidification by adding thermophilic microbial lactic flora. When coagulation temperature is reached, the liquid pig rennet is then added to make the milk clot, the amounts used being defined by the strength of the rennet itself and the acidity of the milk; the mass is shaken for a few minutes. This is then left to rest for the amount of time required to complete coagulation, usually about 20-30 minutes. The curds obtained are then broken up roughly with a skimmer and after a short pause the curds are further broken up into fragments the size of a grain of corn. The mass is left to settle at the bottom of the cauldron and it is heated in whey at a temperature of 38-40°C (sometimes it may be pressed delicately to the bottom and sides of the container to encourage the synaeresis process). When ready, the curds are hand-ladled into small baskets (called “fuscelle”), then set on the “tavolo spersorio” (a sloping workbench) to encourage whey to drain out. The cheese is then pressed by hand and after 30 minutes it is turned once, another 30 minutes are allowed to pass and it is turned again. The resulting shaped cheese in a basket is then replaced in the cauldron with the whey, which is heated to no more than 50°C. During this heating the form is pressed once again and, finally, removed from the cauldron; the basket of cheese is then left on the sloping workbench for about an hour. Lastly, dry salting takes place, scattering salt on the upper surface of the cheese and on the rim, turning it in the basket about 12 hours later, then scattering salt on the remaining surface. The salted cheese is left to rest for a further 12 hours in the basket. Finally the cheese is removed from the basket, washed and left to dry, aged in cool premises (temperature 10-14°C and relative humidity 85-90% ) for a period of 4-12 months. The product may be consumed fresh or when just aged, although its traits come into their own when it has matured to the full. In the past the cheeses were left to age in old wooden cabinets, nowadays replaced by cane trellis or wooden shelves, in naturally ventilated premises at room temperature. The cheese is dried for 20-30 days, when it is then known as “incerato” as it begins to develop a waxy rind. The surface of the cheese is partially treated with a mixture of extra virgin olive oil and vinegar. The treatment is dictated by the need to stop formation of mould and makes the cheese especially soft, preventing the rind from cracking. Farindola Pecorino is slightly piquant and has a strong fragrance derived from the plants found in the pastures and in the fodder used to feed the sheep. The unusual process of using pig rennet has very ancient origins and the cheese is thus one of the icon products of the Abruzzo region. Recently a Consortium of 26 producers was founded for safeguarding Farindola Pecorino.