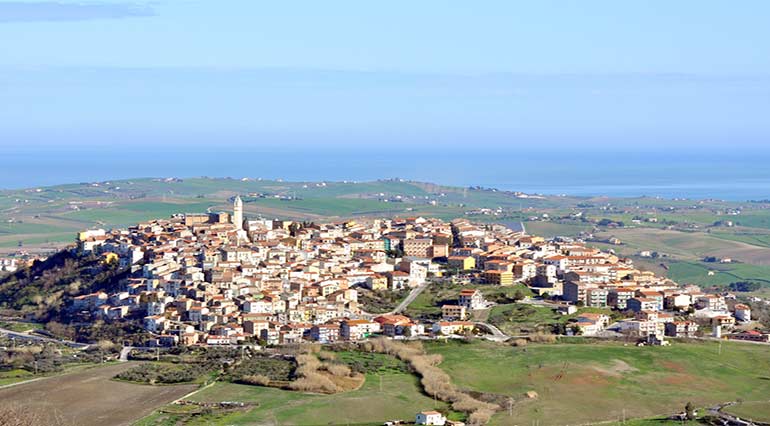 Montenero di Bisaccia (Mundunire in montenerese dialect) is a town of 6.813 inhabitants in the province of Campobasso, Molise.
The town of Montenero di Bisaccia is located about 270m above sea level, from where you can enjoy a wonderful view from the north-east  of the Abruzzo’s mountains and Majella, Gran Sanno, the Twin Mountains and Punta Penna of Vasto , while in the south-west of the Tremiti Islands and the area north of Gargano. The village, located in an area of transition region (hinge), in the hills south of the comb-Abruzzo and the endless plains of the Capitanata. Its territory, irregularly shaped covers 93km, entering in the hilly Molise for about 15km. It is bordered to the northwest with the Abruzzo towns of San Salvo, Cupello and Lentella,  and to the south-east with Petacciato  and Guglionesi, to the south interior with Montecilfone, Palata, Tavenna and Mafalda, while to the north there is the Adriatic Sea. 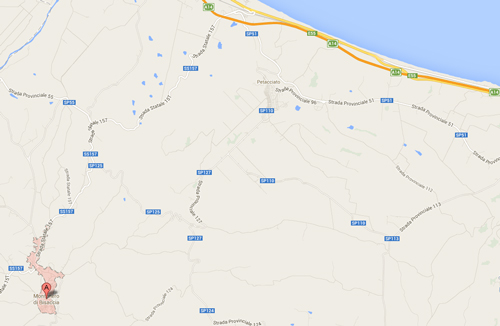 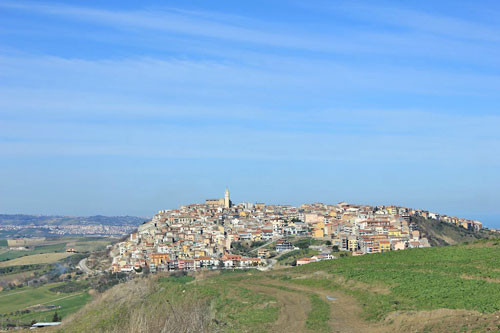 Among the festivities alive in Montenero there is those of  San Giovanni which is still represented in costume, with the songs of this tradition-bound. In the carnival montenerese, there is a parade of floats through the streets of the country. The most important festival is the “Madonna di Bisaccia” (15th and 16th May) and St. Nicholas of Bari (17th May). The cult regards the ancient painting of the Madonna caressed by the baby Jesus. On the effect on the evening of May 15th, the procession in the light of the torchlight from the picturesque grotto of Our Lady on the hill of Bisaccia and get to the Shrine. 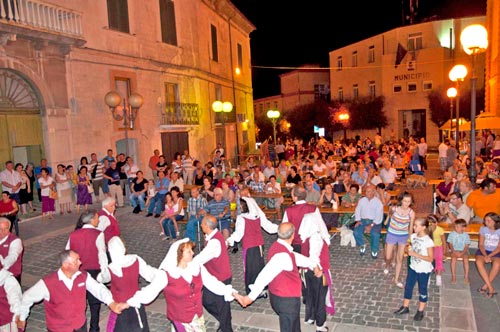 On May 17th is celebrated St. Nicholas of Bari, in memory of the ancient pilgrims who went to Bari. On July 9th, we celebrate the memory of the martyrdom of San Zenone, as well as Oct. 25th when remember 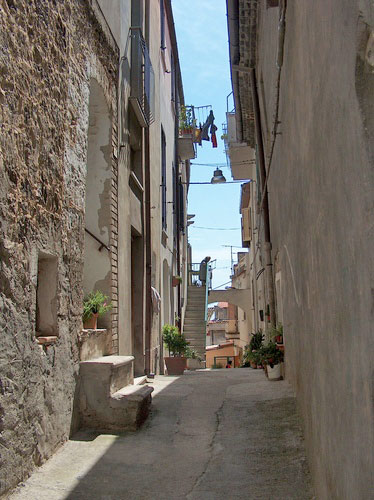 (1529) the gift of a relic consists of an arm bone, kept in an urn dated 1700. The Madonna of CarmineBorgo-Montenero-Molise is commemorated on the Sunday after the liturgical memorial of July 16th, when the mass is celebrated on the square outside the church, with the statue of the Virgin Mary in procession. On September 21st, they celebrate St. Matthew the Apostle, the patron saint of Montenero. The festival welcomes, for several decades, a bicycle race that is held in the afternoon in the streets of the country. A unique event, which comes not from tradition, but which arises as a container to tell a little story of Montenero, is that of the Nativity, from 24th December to 6th January. Created in the early 80s by a group of young spirited, this event has now become the most important in the country, so as to magnetize many visitors also nearby areas. Not the usual nativity scene, but it is a page of history reinterpreted by over 150 people, who live in the event the parties of iron craftsmen, carpenters, shepherds etc.. The place is one of the Caves of Sandstone on the south-east of the hill of Montenero, where it was built an environment very similar to that of the country at the end of the nineteenth century with its shops, all mixed with elements similar to Palestine 2000 years ago. 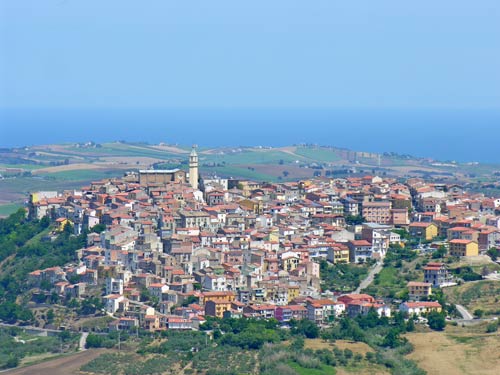 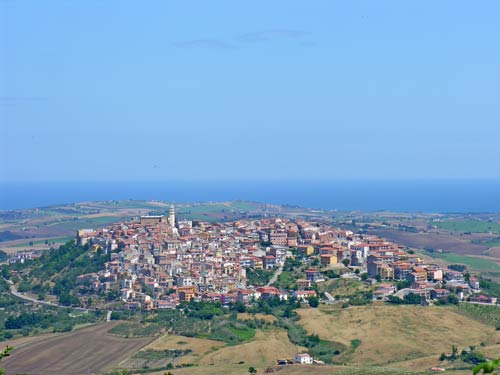 The sausage symbol of the territory of Montenero is ventricina produced in the valley by the Trigno between Molise and Abruzzo , selected meats hand-cut tip of the knife into fairly large pieces , to which are added salt and ground pepper.  Then there’s the sausage-making that is performed with the pig’s bladder , already moisture with orange peel. Then again is linked with specific strings that serve to give greater pressure to this salame. In the end only after a long aging, can finally be tasted, and what taste: try it to know. Another typical sausage is  the Saggicciotto , smoked pork sausage , in addition to liver sausages and meat . Among other meats , lamb and sheep , of course related to the local shepherds , are cooked in different ways and are another delicious dish. Typical is also the pasta, homemade feast days according to tradition, or purchased from craft workshops villagers , we find the characteristic ” cuzztilli “ ( a particular form of fusillo hollow finger ) seasoned with tomato sauces obtained from long cooking in previous fried chicken or rabbit meat or ducks ( preferably stuffed with a mixture of chicken livers and gizzards , eggs , cheese and bread broken ). An essential element to enhance the 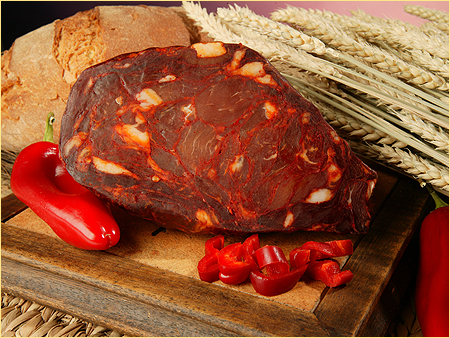 flavors is without doubt the oil, with its fragrance and exceptional quality,  is produced in the myriad of local olive groves in traditional culture and worked in several mills citizens. The main varieties are those indigenous wild olive, round Olivo, Olivo Cherry, Leccino , the Ahr, the Licina and Gentile of Larino. The color is green with yellow reflexes, with a scent of olives and herbaceous,  the taste is defined fruity flavor. As for the wine , Low Molise with its centuries-old vineyards, abundant sources and geographical position, is a medium suitable for the production of wines. The most common varieties in the agro montenerese are Montepulciano, Sangiovese , Cabernet Sauvignon and Aglianico, among the reds; and Trebbiano, Malvasia, the Chardonnait and Falanghina among the whites. We conclude with the sweets that are a necessary conjunction with festivals and traditions. At Christmas we find ” cicerchaita “ ( pieces of fried dough gilded with almonds and honey ), or the ” cill “ (a kind of sweet calzone stuffed with ” pascanesco “, that is a paste made of cooked , almonds and bread crumbs chopped fine ) and then again scrippelle ( long candles of fried dough ) or ” cagginitt “ ( pastry filled with almond paste and chickpeas ). At Easter , however, is the time of sweets in the shape of pupae or horses to give to children, pine cones and rustic special called ” filatone “ ( pastry filled with cheese or ricotta). 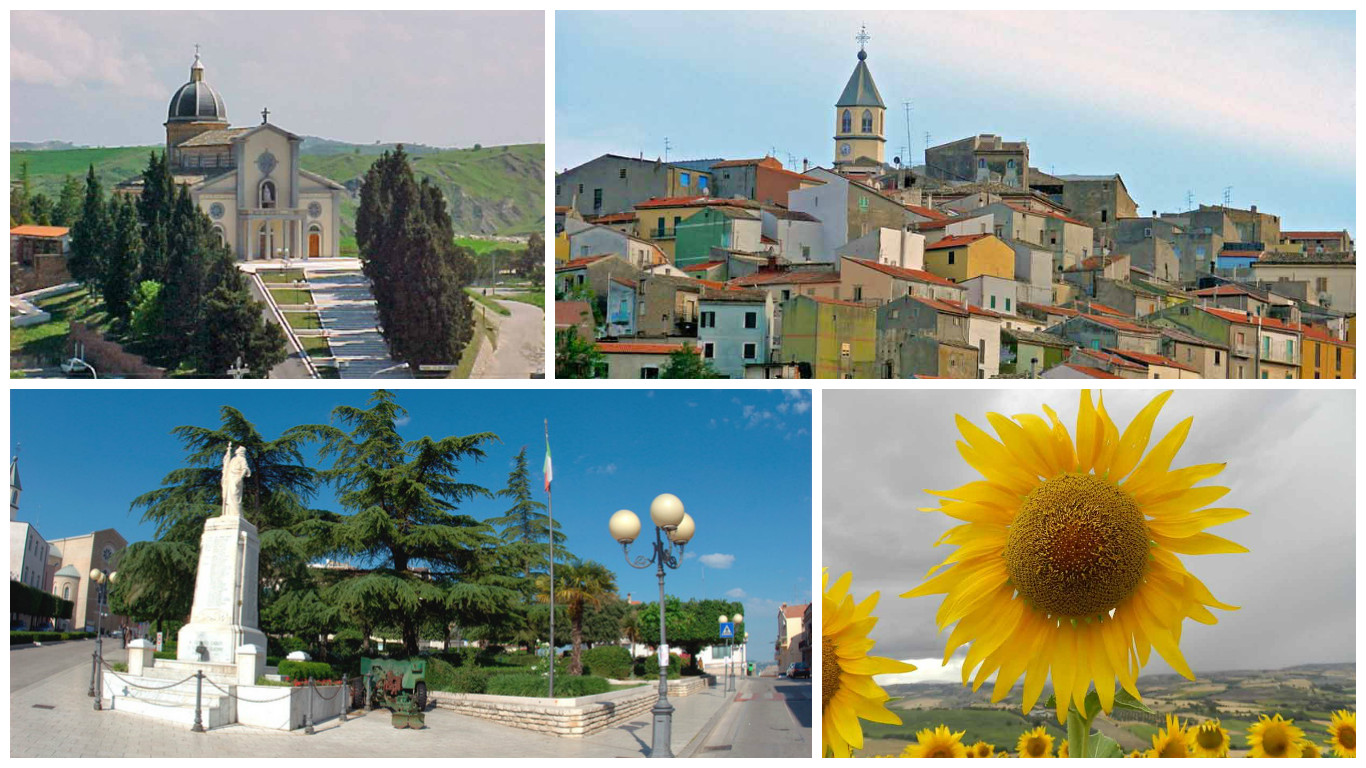 All this is the kitchen of Montenero; pure, because it comes directly from pastoral culture that use only local products, of which our earth is rich in olive oil, sauces, vegetables, spices, smells etc. … Enjoy! 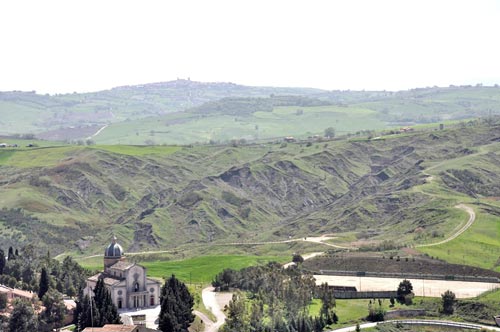 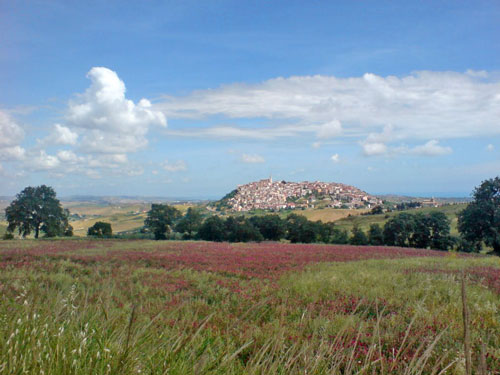 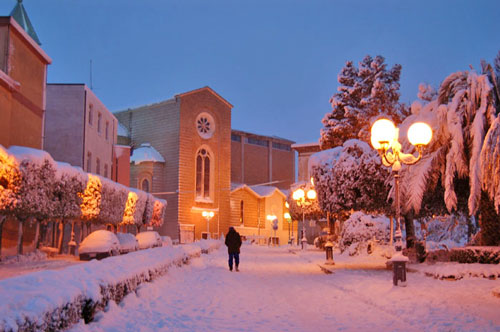 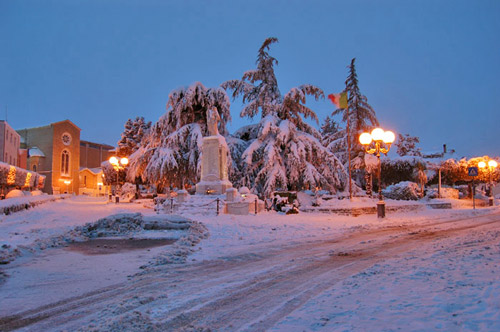 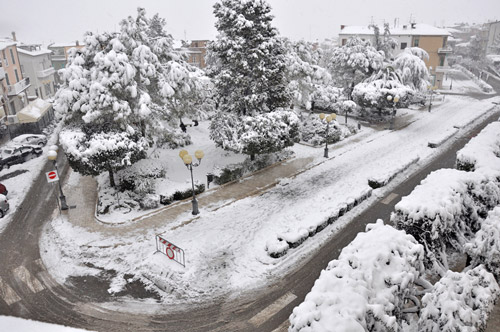 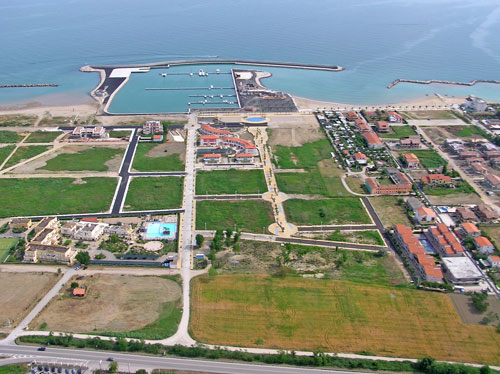 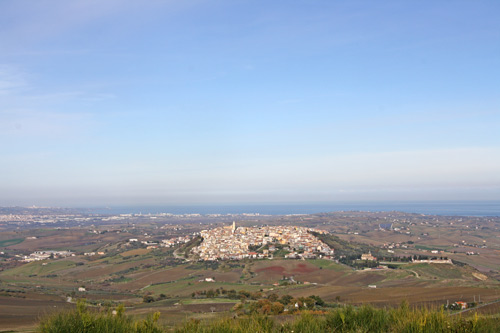 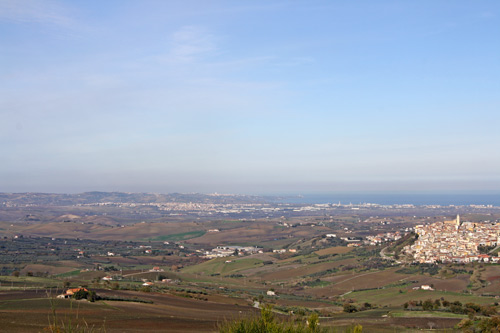 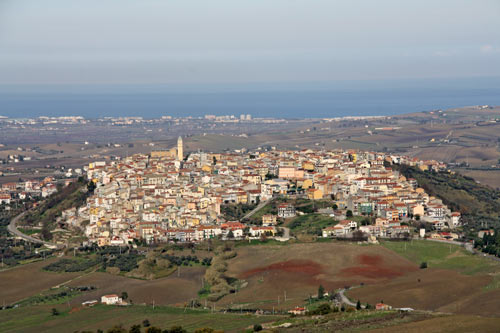 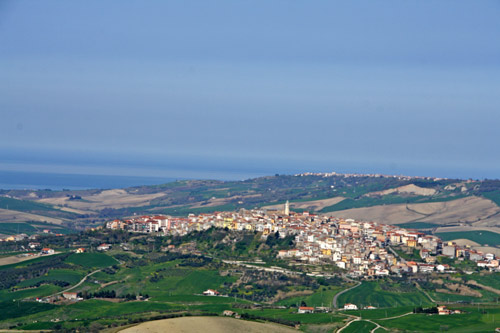 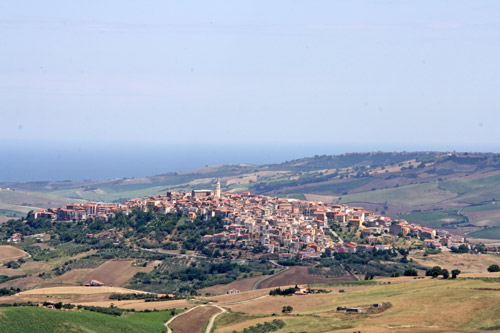 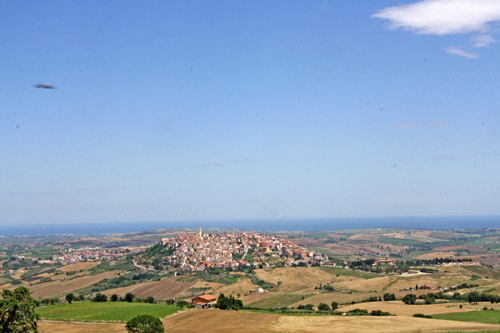