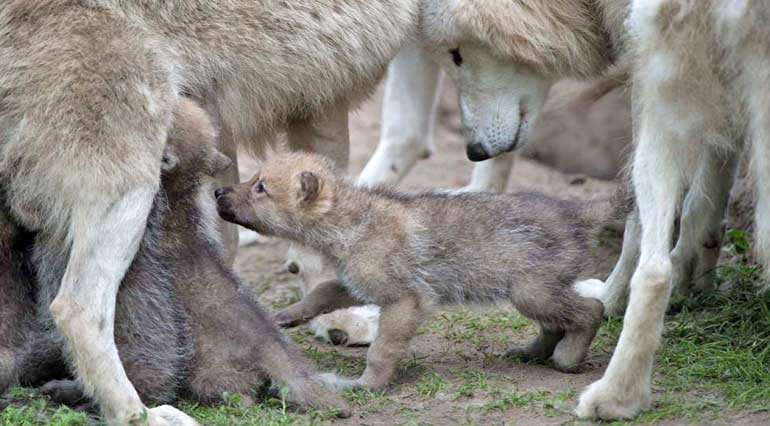 The proposal of constituting a National Park was firstly forwarded in1917 by ProMontibus Federation. The 2nd October  1921 in Opi, one of the most suggestive villages of the Park, the Montibus et Silvis association from Bologna directed by the well known zoologist Prof. Alessandro Ghigi and by the botanist Prof. Romualdo Pirotta, created the first Italian protected area. The association rented out 500 hectares of land of Costa Camosciara from Opi village; this land constituted the initial centre of the Park, located in the highest part of Val Fondillo. 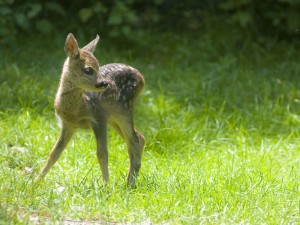 Nowadays Val Fondillo is one of the most famous and visited valleys of the Park.  In this wild and inaccessible territory located in the highest part of Sangro river, many species started to proliferate, Marsican Brown Bear, Abruzzo Chamois, Wolf  Appennine, and other less important species. The 25th November 1921 the opening ceremony took place and a new organisation was constituted: Ente Autonomo Parco Nazionale d’Abruzzo.  The 11th of September 1922, under the initiative of Erminio Sipari, a political local figure and one of the founders of the Park, further 12.000 hectares were added, located in the municipalities of Opi, Bisegna, Civitella Alfedena, Gioia de’ Marsi, Lecce dei Marsi, Pescasseroli and Villavallelonga, together with other 40.000 hectares of External Protection. The addition of these two extra territories was publically performed in Pescasseroli, and the Park officially became National Park. The 11th of January 1923, the National Park was officially recognised as an institution with a new law decree issued by the Italian State. 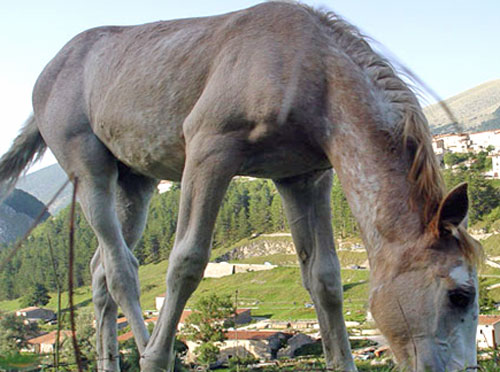 A few decades before, also King Vittorio Emanuele wanted to create in this same area a game reserve, to avoid the extermination and the extinction of important and unique wild species. In fact Bears, wolves and chamois used to populate a much wider area, including the whole Apennines, but they started to hide in smaller and more remote areas  due to environmental degradation, deforestation, spreading human population and indiscriminate hunting. Thanks to the Park these animals started to repopulate wider areas.

The Park has also helped the preservation of  values, cultures and traditions representative of the mountain areas; Therefore nowadays the park represent not only a natural reserve but also an historic site where is possible to experience a traditional and authentic style of life.

Environmental protection should be a milestone for our society. The goal of the Park is to preserve mountains, forests, rivers, lakes, plants, animals and also human heritage and traditions.

Integration between human being and environment

An important duty of the Park, is to promote a development for local people based on conservation, valorisation and careful management of natural and cultural resources.  For this reason the Park promotes all the traditional activities linked to the heritage of this territory.

The National Park of Abruzzo Lazio and Molise is open to everyone in order to divulgate a better knowledge of the territory and to develop a deeper environmental consciousness. These aims are pursued through environmental education, visitors centres, museums, protected areas, thematic path walks.

The territory is deeply analysed and studied in all its components: historical, social, geological, faunal and botanical; Research is fundamental to understand the value of these elements and to find the most suitable way to protect and preserve them.

The National Park has a mite climate that allow tourists to visit the sites all year around. Is advisable to avoid festivities and bank holidays because the Park tend to be too busy. The best seasons to visit the Park are spring and autumn for the exceptional colours and shades of the landscape. Furthermore during these seasons the assistance from the staff is more accurate.  When visiting the Park, during every season, is strongly advisable to be provided of mountain equipments, cameras, binoculars, maps, trekking shoes.

The vast majority of roads and paths of the Park are closed to traffic, therefore the car can be used only to get to the Park and to move from a site to the other: excursions, walks, visits to natural sites can be done only by foot, on horseback, on donkey back or by bicycle, in winter also cross country skiing can be a good way to discover the Park.

Anyway, the best way to experience the Park is by foot, because by foot is easier to spot wild animals, to admire flowers and plants, to get close with the nature and with all it has to offer.

What to do in the Park

Once in the Park is advisable to get acquainted with the nature through walks and excursions on foot; only by foot is possible to spot wild animals, to observe closely plants and flowers and to enjoy a real contact with the nature. It is also important to try to walk in absolute silence. Footpaths maps are available at Tourist Information Offices and Visitors Centres; more than 150 eco-walks are signalled for a total of 250km. Every path is marked with the international signals red/white/red with a letter or a number in the middle.

Typical delicatessen of the Park 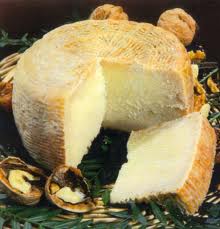 Local cuisine has an old and tradition and has been kept genuine as it used to be in the past; The dishes are all prepared with fresh and local ingredients and the preparation is accurate, so even the most simple dishes have a special touch and a unique flavour.  Amongst the traditional dishes we find the so called “maccheroni alla chitarra”, prepared with a peculiar machine with metallic strings that remind of a guitar; another dish is called Orapi and it consists of a soup made with wild spinaches and beans, can be served with or without pasta; Roasted meat is typical too, as well as numerous cheeses: pecorino, ricotta made with sheep milk,  caciocavallo made with cow milk, and also a cheese made from goat milk called Marzolina. There are also various types of legumes, honey, jams all produced with local ingredients.  At least but not last sweets, typical toffees  and  liquors.

The most representative animal of the park is the Marsican Brown Bear. 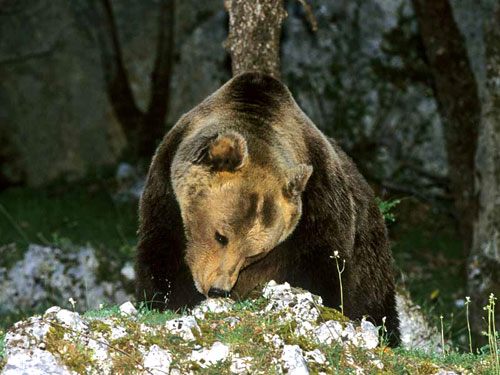 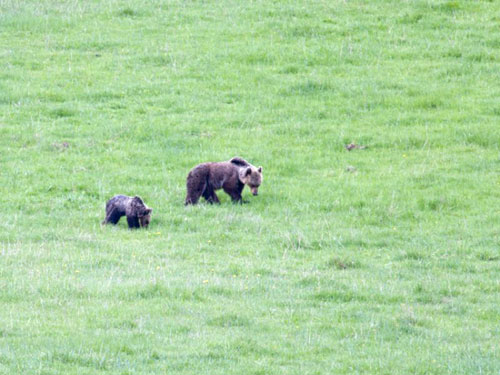 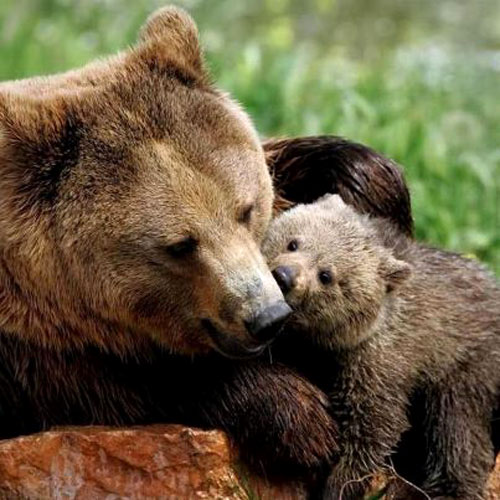 Characterised for its dimensions, its weight that can exceed two quintals and its lazy lonely and calm behaviour; it is an omnivorous animal that changes its diet according to the seasons. Normally the Marsican Brown Bear lives in the woods but also in high mountain prairies. It is not easy to spot a Marsican Brown Bear, but its footprints can be found on the mud and on the snow. Big stones turned upside down are an evidence of the presence of the bears, in fact, they move the stones in order to eat the insect living beneath them. Marsican Brown Bear is known to be highly pacific and tolerant toward humans.

Another important animal living in the National Park is the Abruzzo Chamois. There are almost 700 specimens in the park, and nowadays the population is increasing. It is not difficult to spot a Abruzzo chamois with its peculiar colour and the dimension of its horns are, they usually live in high altitude prairies, but in winter when the snow is abundant they can be spotted also at lowest altitudes. The mounts hosting them are Camosciara, Monte Meta, Mainarde, Monte Amaro, Monte Marsicano and on the mountains around Val Canneto.

Wolf Apennines is another protected species of the Park; it is one of the most persecuted and threatened animals, in fact it is an endangered species.  This wolf lives isolated or in small packs that are hierarchically organised, it is a very dynamic animal, very astute and clever. Wolves are not easy to be spotted, they normally live during the night and sleep or hide during the day. Their presence can be detected through the footprints they leave on the soil, very similar to the dogs’ ones but disposed in just one row. Another recognisable sign of their presence are the hairy excrements. 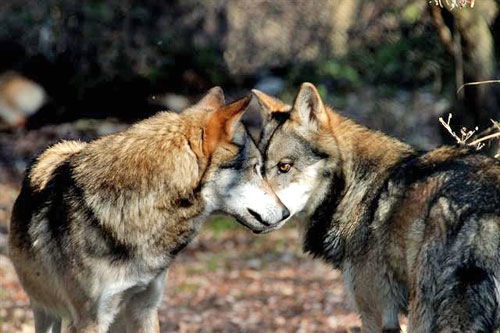 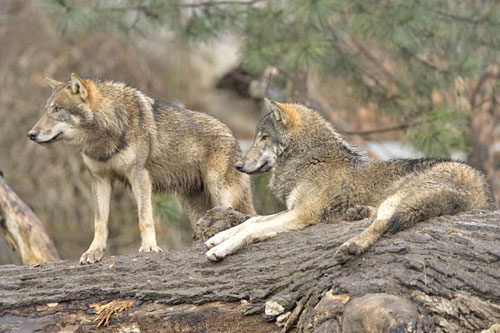 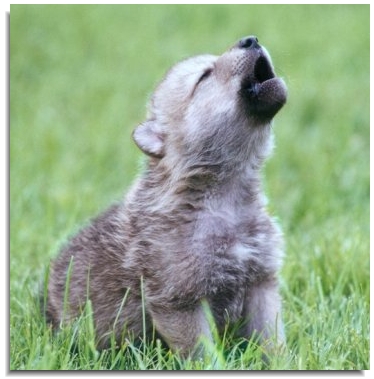 During the 70th deer and roe deer have been repopulated because they were almost completely disappeared from the Park. These two herbivorous usually live in woods with glades and bushes. Males of both species are characterised by a belling that echoes on the valleys during the love season. Is not difficult to spot deer pasturing during the coolest hours of the day, but is more difficult to spot roe deer. Signs of their presence are the debarked trees, where they scratch their horns. 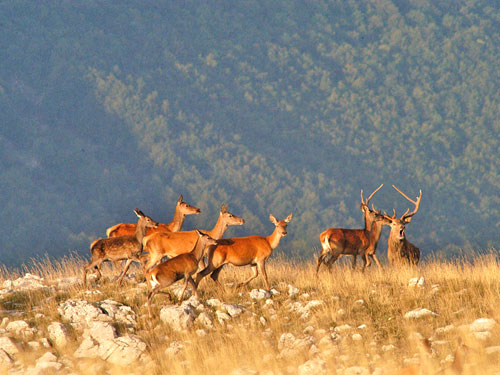 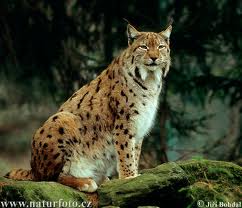 The lynx is a mysterious animal that live in the most wild and inaccessible parts of the Park. The most peculiar characteristics of this feline are its hear with black tufts and a short tail with a black tip. The lynx is a lone and territorial animal, it hunts rabbits, foxes, young deer or red deer, birds and reptiles. It’s a silent animal, that can be heard with its whining call only during the love season from February until March. Like any other feline, it is not easy to spot them, and the signs of their passage are the hairs left on the soil and the scratch on trees and trunks.Besides the above mentioned mammalians, there are other less numerous but not less important animals that are becoming endangered species.

Firstly the otter, that lives in the most quiet hidden places in rivers, lakes and streams. The wild cat, that is difficult to be spotted although diffused and popular. The marten, that only lives in centuries old forests. Beech martens, polecats, weasels, badgers are other typical animals together with Apennines foxes. There are numerous species of rodents too: dormouse, hedgehogs, squirrels. 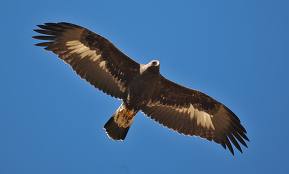 There are numerous species of birds, but the place of honour belongs to the royal eagle, which lives in the highest and inaccessible ridges. You can see them in groups
flying over ridges, valleys and peaks searching their preys like birds, young  or diseased chamois bucks.

There also exist almost all birds of prey like the buzzard, the peregrine falcon and common species like the kestrel and the sparrow hawk.

At night it is possible to hear the bird calls of the nocturnal birds of prey: the owl, the brown owl and the barn owl.

In spring and summer you can hear the bird songs which sounds in almost every corner of the park and it would be difficult to specify each specie settled and bird of passage resided. Even if a couple of them would merit it to be mentioned.

In the wood you would often see the jaybird and the great tit which is a little chubby passerine bird. The green woodpecker is easy to recognize due to the characteristic “drum” while he is searching for insects on the tree trunk. The hoopoe is a bird which nests in the woods but loves hunting in the spacious forest glade and in springtime it comes back from warmer places where it overwintered.
Without any doubt the most interesting of the wood is the rare pecker where it lives only in limited areas of the southern Apennines Mountains.

Near to the watercourses you will find the water ouzel, the grey wagtail, the mallard and many other birds settled as well as birds of passage as the grey heron. 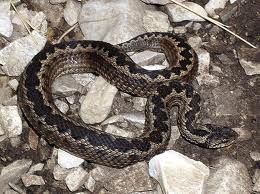 Even the reptiles have their place in the ecosystems of the park: one of the most known is the green whip snake which is find in fields and rifts.

Among the vipers apart from the common asp viper, is the vipera ursinii which is more rare and located and lives preponderant from insects.

You even find the smooth snake and in the colder places also the blind worm and the ring snake.

Among the lacertids there is the lizard and the green lizard. 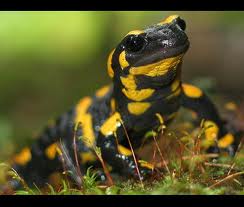 Sure this amphibian have to be mentioned: the fire salamander, the spectacled salamander both placed in the colder and virgin beech grove. Equally we could mention the punctate tritone discovered in the Vivo Lake and also the crested tritone often common in smooth water and less stagnant.