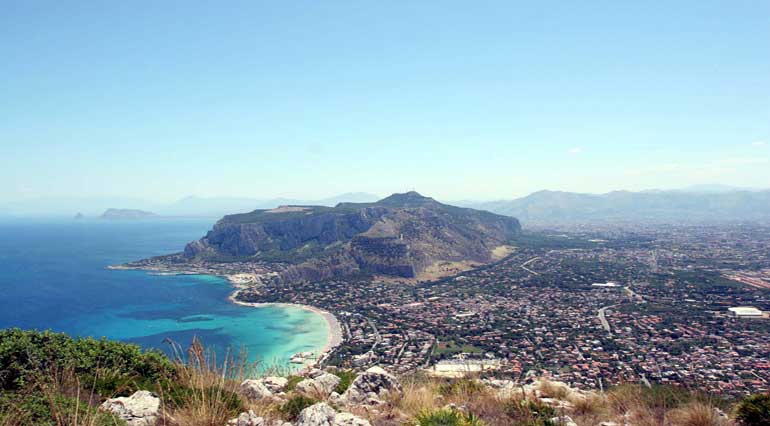 Sicily, is the largest island in the Mediterranean Sea; along with surrounding minor islands, it constitutes an autonomous region of Italy, the Regione Autonoma Siciliana (Sicilian Autonomous Region). 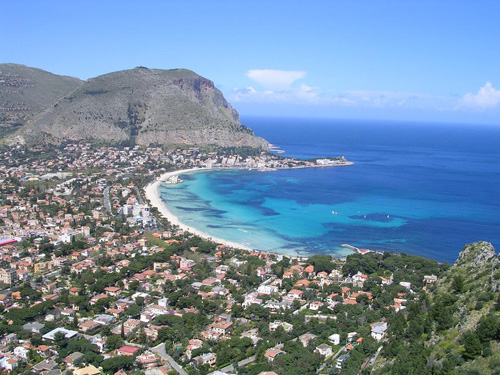 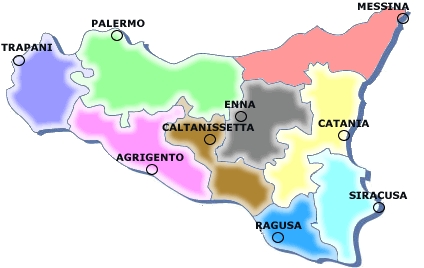 Sicily is located in the central Mediterranean. It extends from the tip of the Apennine peninsula from which it is separated only by the narrow Strait of Messina, towards the North African coast. Its most prominent landmark is Mount Etna, which is at 3,320 m (10,890 ft) the tallest active volcano in Europe and one of the most active in the world. The island has a typical Mediterranean climate. 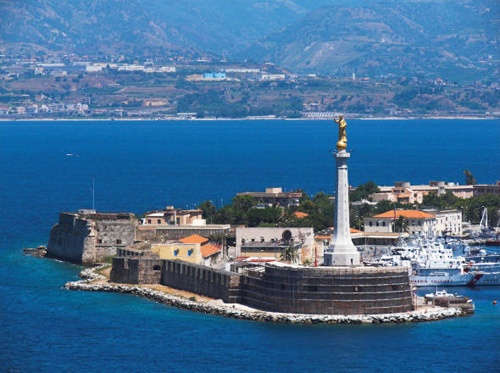 The earliest archeological evidence of human dwelling on the island dates from 8000 BC. At around 750 BC, Sicily became a Greek colony and for the next 600 years it was the site of the Greek-Punic and Roman-Punic wars, which ended with the Roman destruction of Carthage. After the fall of the Roman Empire in the 5th century AD, Sicily often changed hands, and during the early Middle Ages it was ruled in turn by the Vandals, Ostrogoths, Byzantines, Arabs and Normans. Later on, the Kingdom of Sicily lasted between 1130 and 1816, subordinated to the crowns of Aragon, Spain, the Holy Roman Empire, and finally the Bourbons, as the Kingdom of the Two Sicilies. It was united with the rest of Italy in 1860, but a subsequent economic collapse led to a wave of emigration, separatism, and the emergence of the Mafia, whose criminal activities pose problems to this day. After the birth of the Italian Republic in 1946, Sicily was given special status as an autonomous region. 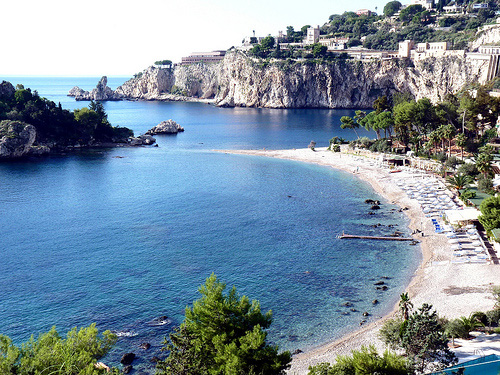 Sicily has a rich and unique culture, especially with regard to the arts, music, literature, cuisine, architecture and language. Sicily also holds importance for archeological and ancient sites such as the Necropolis of Pantalica, the Valley of the Temples and Selinunte. 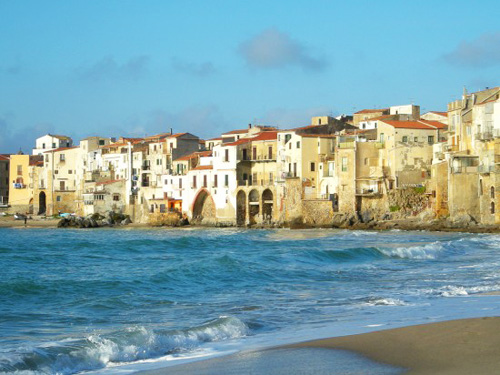 The Sicilian economy is diversified. The agriculture sector is significant with citrus fruits, olives and olive oil, grapes and wine. Tourism and real estate are economically important for the island. Still, with the gross domestic product per capita at around €17,000, it stands at only two-thirds of the European Union average and is one of the least developed regions of Italy. 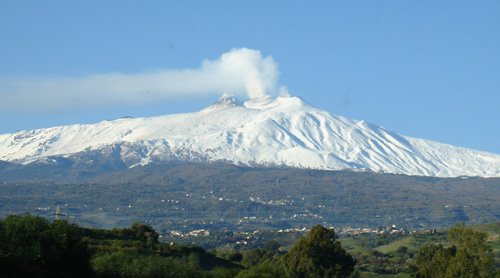 Sicily has roughly triangular shape, which earned it the name Trinacria. It is separated to the east from the Italian region of Calabria through the Strait of Messina. The distance between the island and mainland Italy by the Strait of Messina is about 3 km (1.9 mi) wide in the north, and about 16 km (9.9 mi) in the south of the Strait.

The terrain of inland Sicily is mostly hilly, and intensively cultivated wherever it was possible. Along the northern coast, mountain ranges of Madonie, 2,000 m (6,600 ft), Nebrodi, 1,800 m (5,900 ft), and Peloritani, 1,300 m (4,300 ft), represent an extension of mainland Appennines. The cone of Mount Etna dominates over the eastern coast. In the south-east lie lower Hyblaean Mountains, 1,000 m (3,300 ft). The mines of the Enna and Caltanissetta district were a leading sulfur-producing area throughout the 19th century, but have declined since the 1950s. 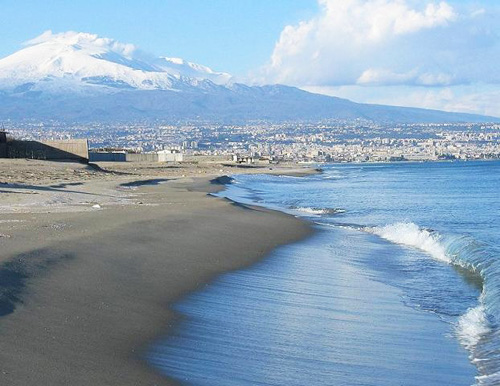 Sicily and its small surrounding islands have some highly active volcanoes. Mount Etna, located in the east of mainland Sicily with a height of 3,320 m (10,890 ft), is the tallest active volcano in Europe and one of the most active in the world. The Aeolian Islands in the Tyrrhenian Sea, to the northeast of mainland Sicily, exhibit a volcanic complex including Stromboli. Currently active also are the three volcanoes of Vulcano, Vulcanello and Lipari, usually dormant. Off the southern coast of Sicily, the underwater volcano of Ferdinandea, which is part of the larger Empedocles, last erupted in 1831. It is located between the coast of Agrigento and the island of Pantelleria (which itself is a dormant volcano), on the underwater Phlegraean Fields of the Strait of Sicily. 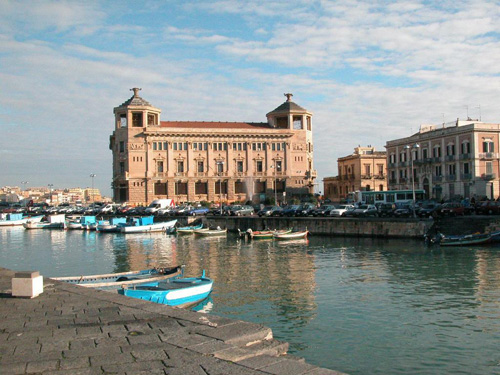 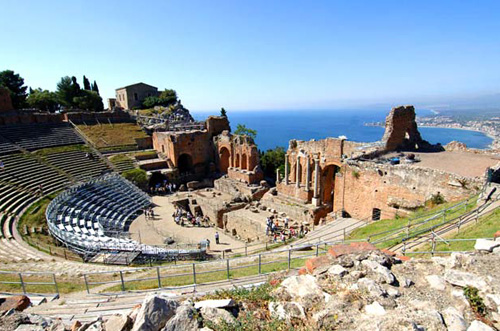 The island is drained by several rivers, most of which flow through the central area and enter the sea at the south of the island. The Salso flows through parts of Enna and Caltanissetta before entering the Mediterranean Sea at the port of Licata. To the east, there is the Alcantara in the province of Messina, which exits at Giardini Naxos; and the Simeto which exits into the Ionian Sea south of Catania. Other important rivers on the island are to the southwest with Belice and Platani. 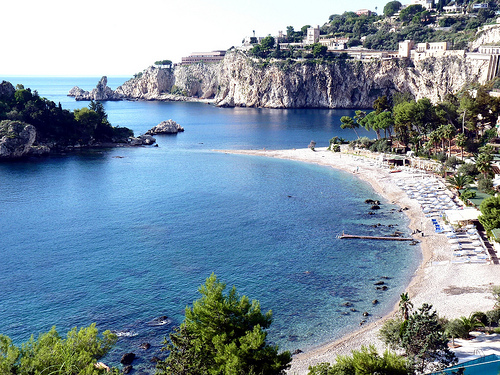 Between sky and fire – The Etna Park is not distinguished only by the fascination of the lava flows that incessantly mark and modify its territory. The whole area of the park is also made unique by a plant universe that makes up and breaks down all the colours of the palette of Mother Nature.

The territory of this park comprises the highest peaks in Sicily – except, of course, for the Etna. In the Madonie there are almost 50% of the flora species on the island and various endemic species of great importance, like the Abies nebrodensis, a relict from the third Ice Age. 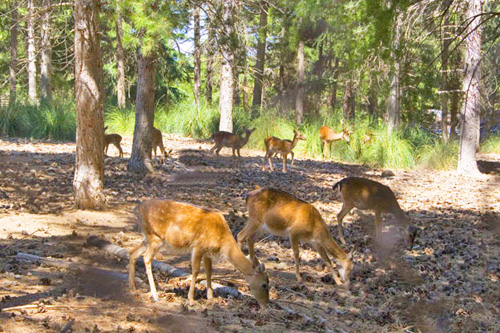 This mountain chain – part of the Sicilian Apennines (formed by both Madonie and Peloritans) – extends for about 70 km. parallel to the northern coast of the island.

Following the course of the river – It is impossible to choose a single zone, a single piece of this park that is developed along 50 kilometres of the Alcàntara river. 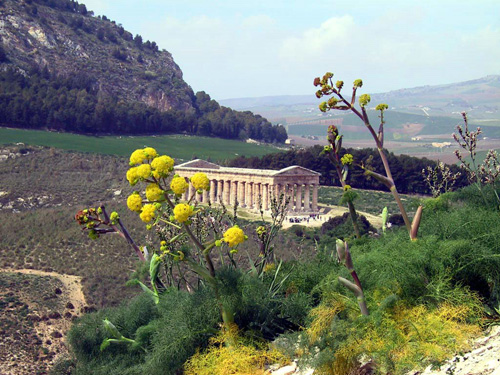 Sicily has a typical Mediterranean climate with mild and wet winters and hot, dry summers.
According to the Regional Agency for Waste and Water, on 10 August 1999 the weather station of Catenanuova (EN) recorded a maximum temperature of 48.5 °C (119 °F), which is the highest temperature ever recorded in Europe by the use of reliable instruments. The official European record – measured by minimum/maximum thermometers – is recognized to Athens, Greece, as communications reported a maximum of 48.0 °C (118 °F) in 1977. 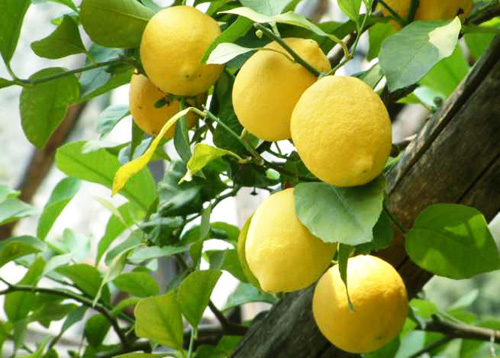 Sicily produces more wine than New Zealand, Austria and Hungary combined, but was previously known mainly for fortified Marsala wines. In recent decades the wine industry has improved, new winemakers are experimenting with less-known native varietals, and Sicilian wines have become better known. The best known local varietal is Nero d’Avola, named for a small town not far from Syracuse; the best wines made with these grapes come from Noto, a famous old city close to Avola. 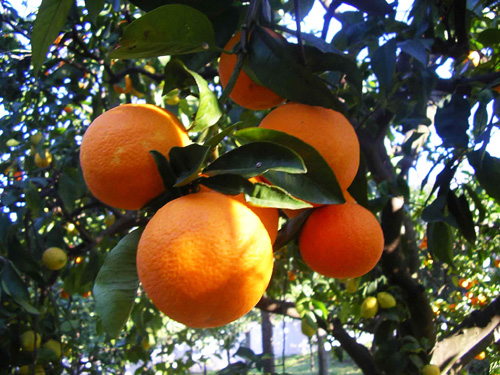 There are important tuna and sardine fisheries.

The use of apricots, sugar, citrus, sweet melons, rice, saffron, raisins, nutmeg, clove, pepper, pine nuts, cinnamon (along with fried preparations) is a sign of Arab influences from the Arab domination of Sicily in the 10th and 11th centuries. 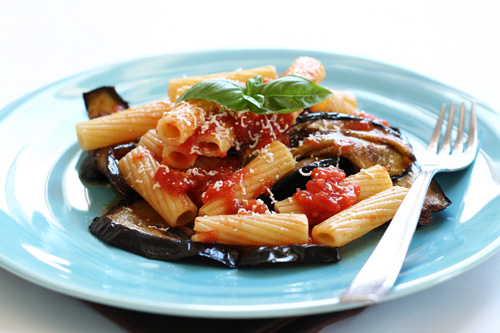 Normans and Hohenstaufen influences are also found, such as in the fondness for meat dishes, such as Bruscialoni. Later, the Spanish introduced numerous items from the New World, including cocoa, maize, peppers, turkey, and tomatoes and other produce. In Catania, on the east coast, initially settled by Greek colonists, fish, olives, broad beans, pistachio and fresh vegetables are preferred instead. Much of the island’s cuisine encourages the use of fresh vegetables such as eggplant, peppers, and tomatoes, and fish such as tuna, sea bream, sea bass, cuttlefish, and swordfish. In Trapani in the extreme western corner of the island, North African influences are clear in the use of couscous. 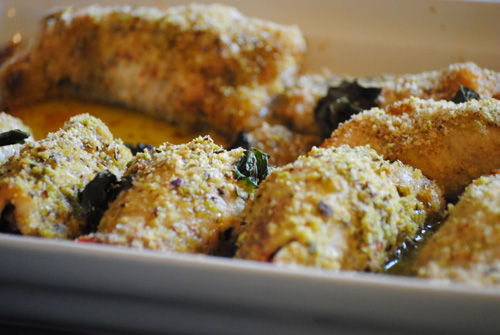 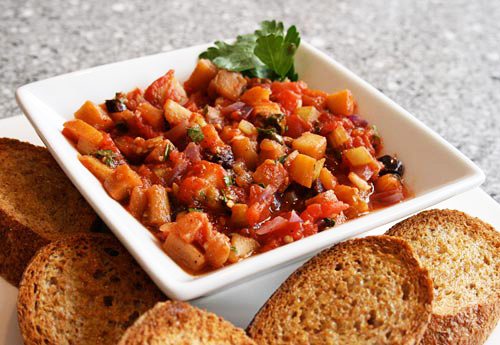 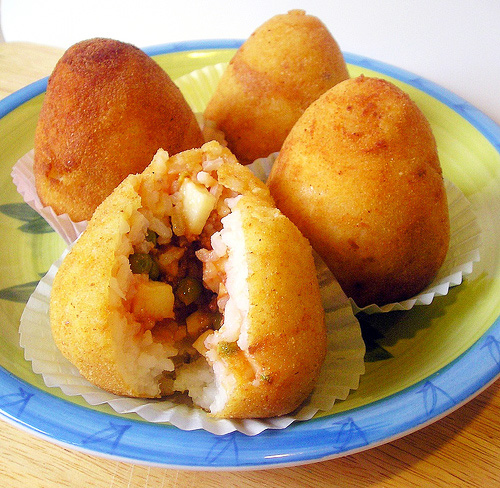