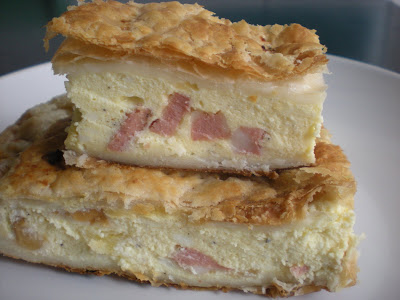 Sweet rustic pie this round or rectangular shortcrust pastry pie, is filled with mortadella, cured ham, fresh cheese, grated Parmesan, eggs, and sometimes includes chopped sausage, green olives and milk. This recipe, described in 1978 in a publication edited by R. Faranda, begins with the preparation of the short pastry: a well of flour is prepared and eggs are broken into it, removing half the whites, then lard, sugar, yeast and a pinch of salt are added. This is all mixed together until a soft, even dough is acquired.

The recipe requires the use of Sweet rustic pie, a 50mm-thick sheet of which is used to line a baking tin that has previously been greased with lard and floured; this is then filled with wedges of hardboiled egg, long strips of mortadella, finely-chopped ham and, if preferred, chopped pitted olives and sausage.
The remaining egg whites are beaten together with a handful of Parmesan and some of the milk from the filling, if needed. The rest of the dough is used to cover the pie, coating the pastry with beaten yolk so that a shiny golden patina forms on the top. The pie is oven baked at moderate heat, for about an hour.
Sweet rustic pie is traditionally served for ceremonies and festivities, but also as a snack.