The Castle of Roccascalegna Abruzzo in the heart of Italy 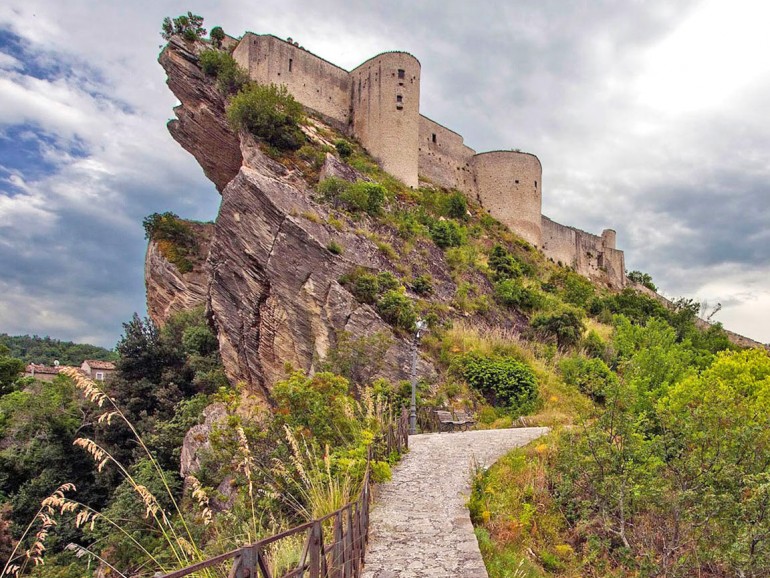 Roccascalegna is an Italian town of 1.251 inhabitants in the province of Chieti in Abruzzo. It is one of the eleven towns of the Mountain Community Middle Sangro-Aventino. The village is dominated by a Castle of Roccascalegna Abruzzo on top of a outcrop rocky in a dominating position over the area, has very ancient foundation and was subject to numerous additions between the sixteenth and seventeenth centuries.

The Castle of Roccascalegna Abruzzo in the heart of Italy 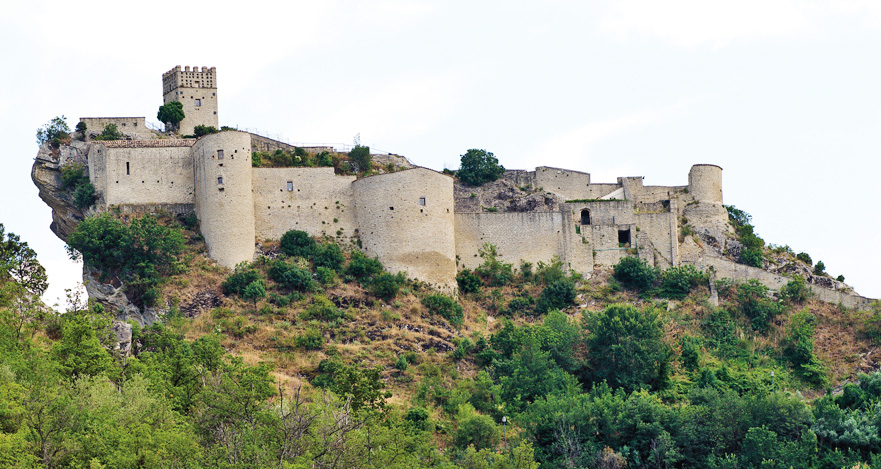 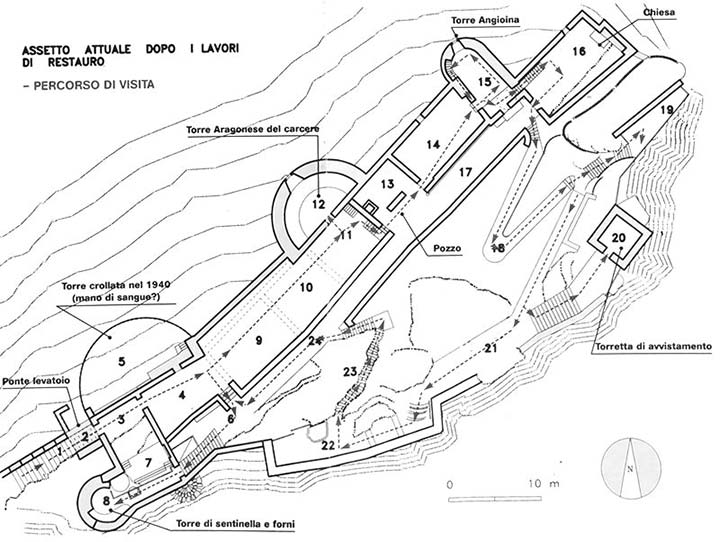 After the restoration made in recent years of the twentieth century, the castle is again open to visitors. The entrance to the castle is trough staircase and it’s possible to pass from one tower to another along other stairs carved into the stone, so you can visit the Tower of the Heart, named for a bas-relief sculptures with heart shape; the Tower of Prison that led to the dungeons of the castle and that dread just looking at it; the Tower of the Oven where the bread was cooked and the Watch Tower that dominates the area and offering spectacular views to visitors. 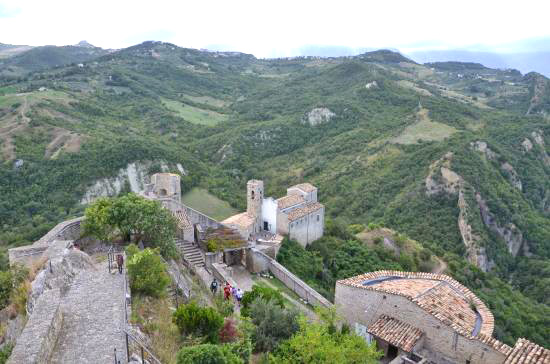 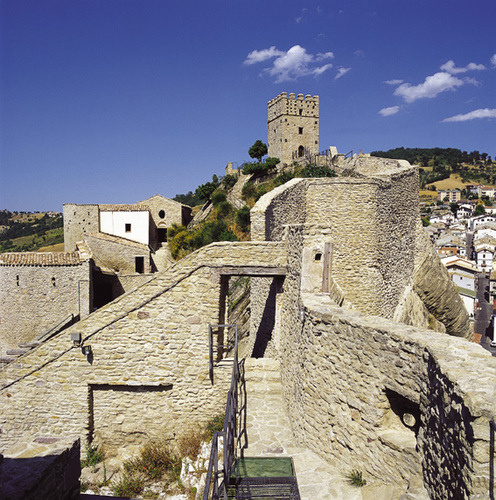 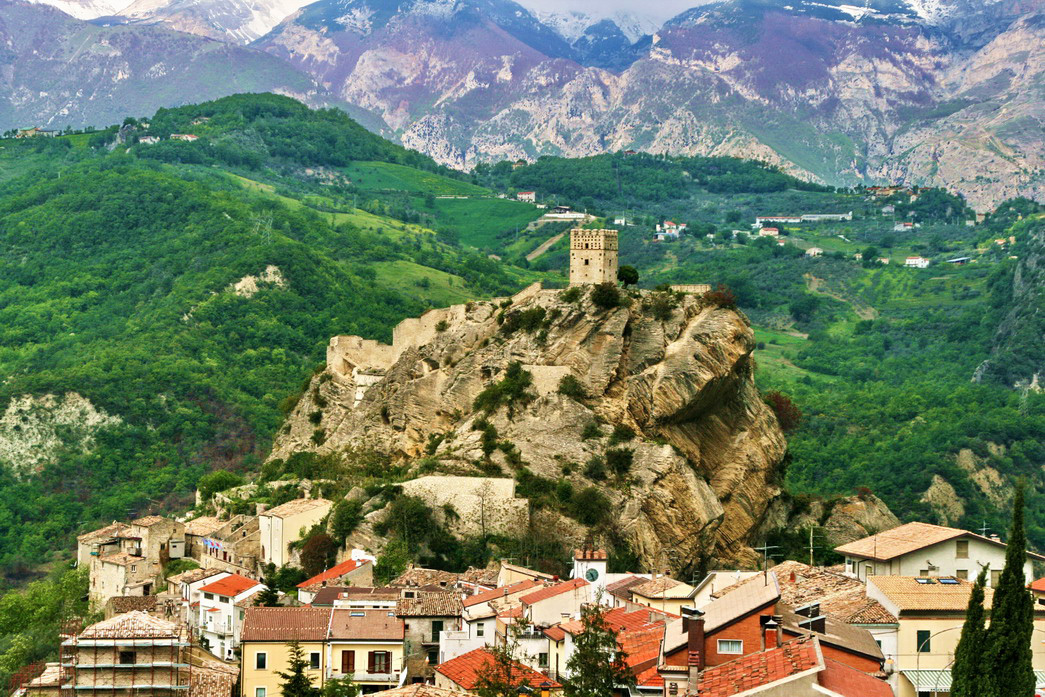 Around the courtyard are arranged various rooms all accessible, starting from the room of weapons where there is a Byzantine flamethrower single piece ever made before in Europe, a machine that can launch remotely famous “greek fire”, a highly flammable mixture that was the secret weapon of the Byzantines for centuries. 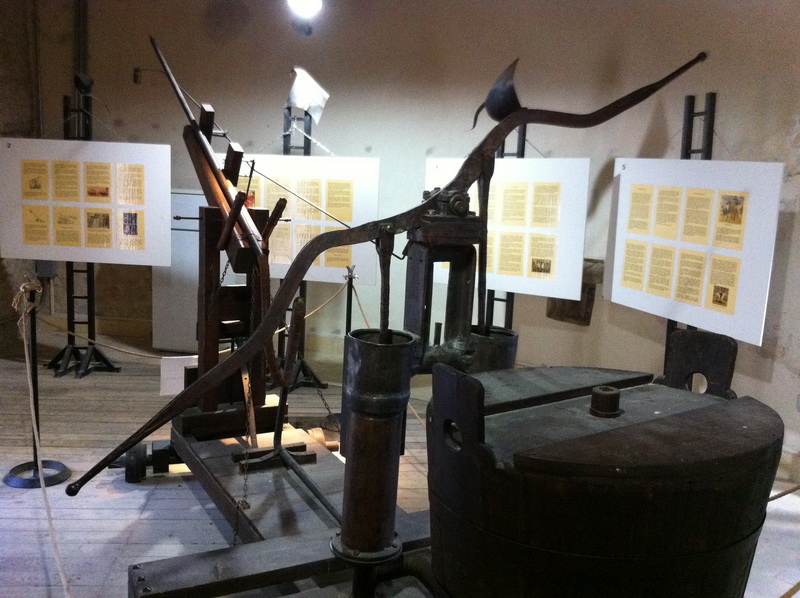 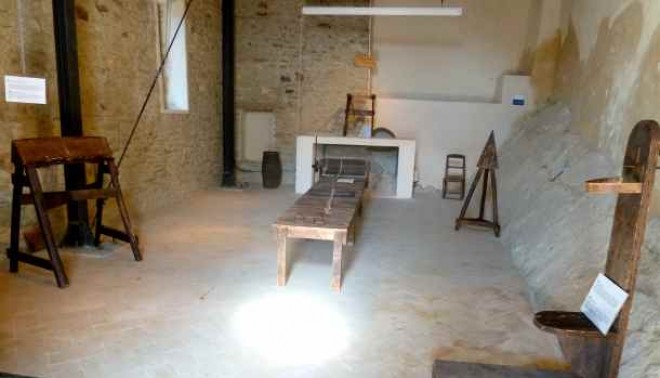 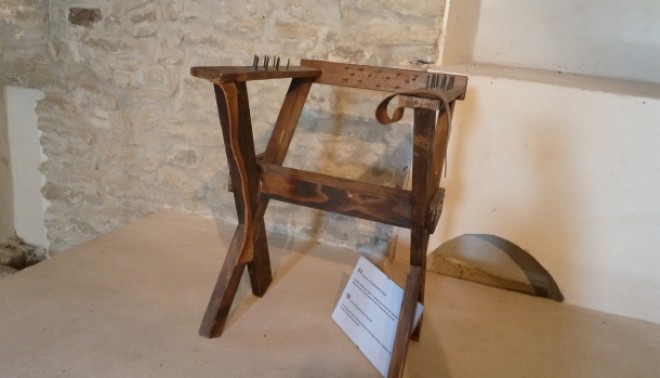 A legend of the castle tells about the application of the rule of the so-called Jus primæ noctis; According to this legend, the Baron of the castle, Corvo de Corvis, in 1646 claims to enforce this rule, which required all women in the town to spend the wedding night with him, instead of the spouse that married. The legend says that the last new bride, or the legitimate husband disguised in her clothes, arrived in the castle to spend the night, has instead stabbed the baron; It also seems that the latter, as he died, has also left an indelible mark on the rock of his bloody hand. In fact, according to rumors, this sign (which proved clearly visible after the collapse of 1940), reappears continuously, despite all the time that has been washed away. 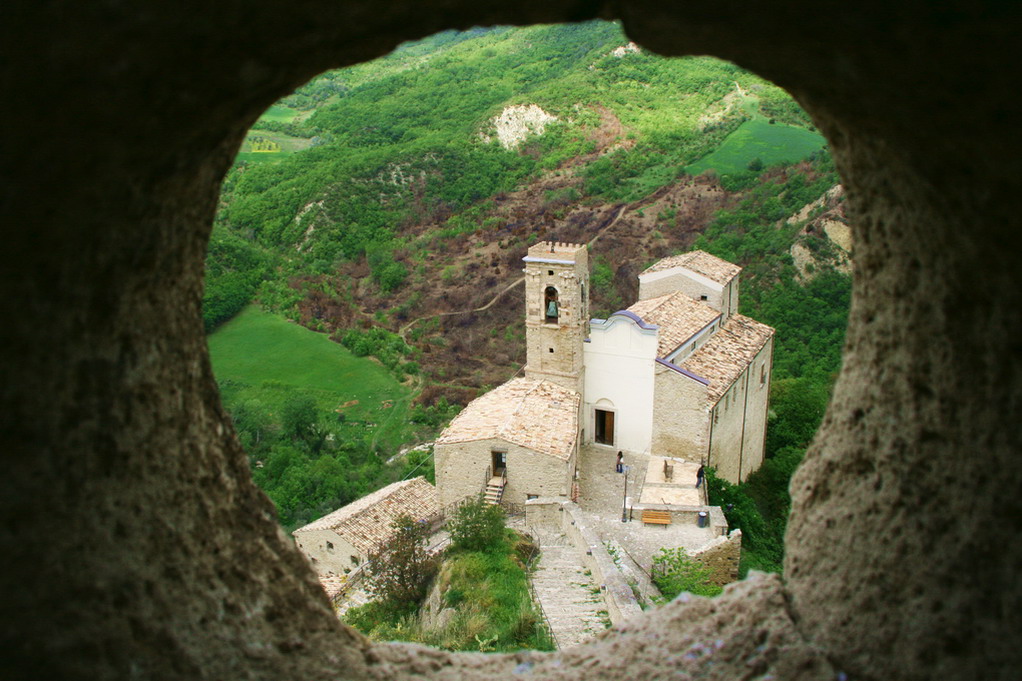 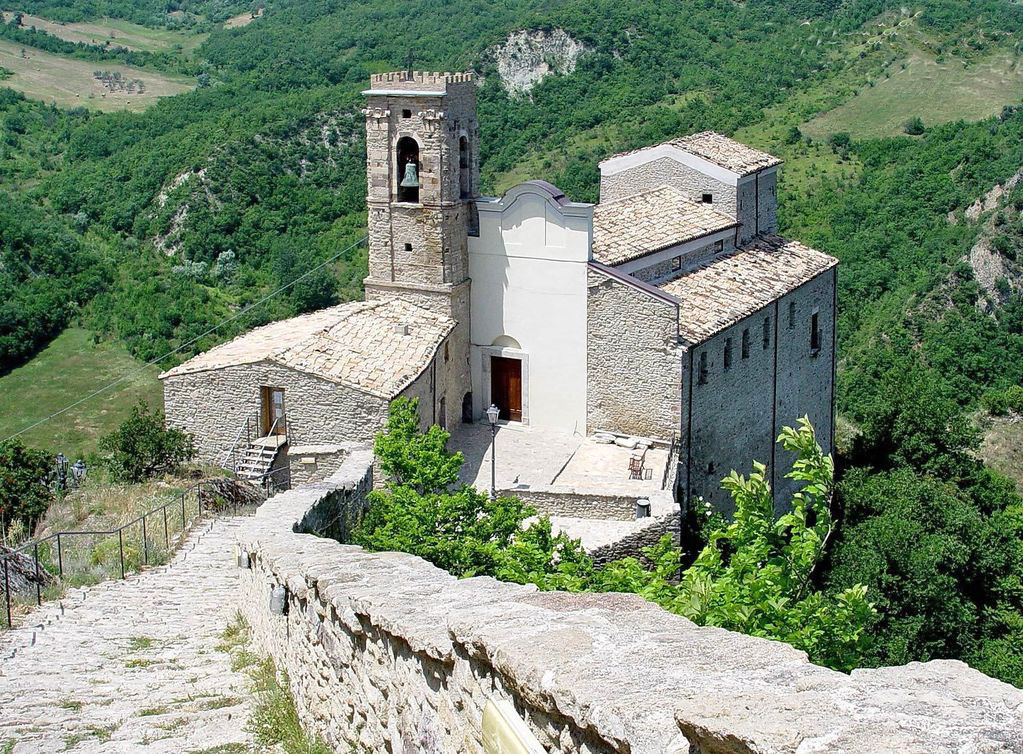 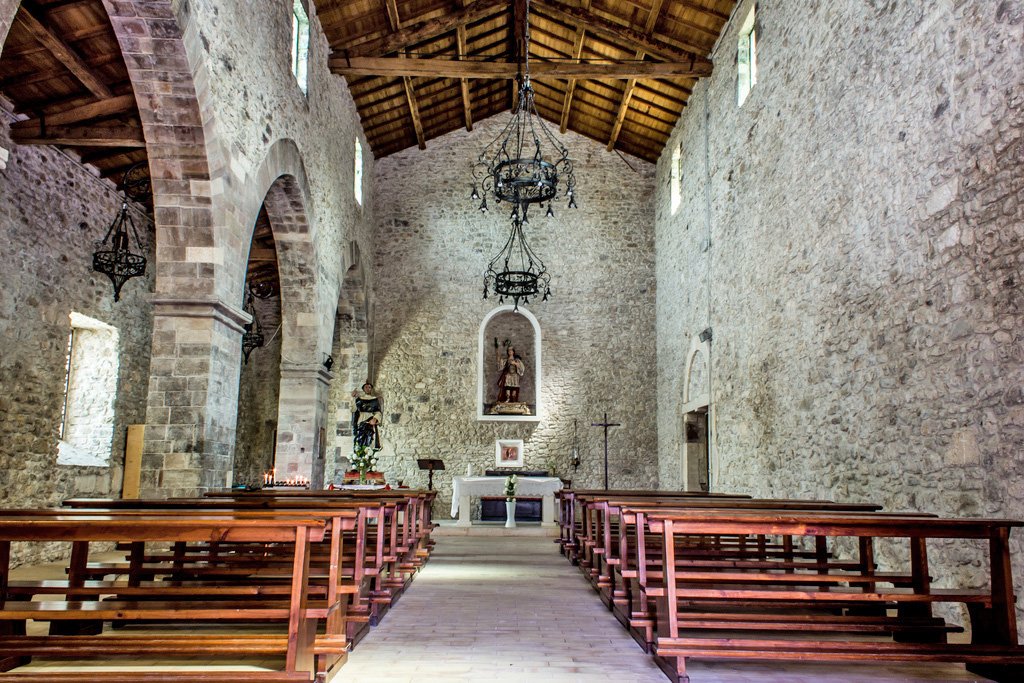 The littel village of Roccascalegna is dominated from a spur of sandstone rock where stands up the castle whose original plant dates from  Norman-Swabian epoch, as the mighty quadrangular tower testified. In the fifteenth century, together with the construction of the little village  across the two mainly streets, Codacchie road and Velzoli road, the fortified structure was in part rebuilt ed enlarged concerning the angeving Aragonese typology that fortetell circular towers to defend the donjon mural. A castle so beautiful and so grand tells us abiut the important position  socio-cultural that the country had, attested from other architectonic manufactures: on the opposite offshoot of the spur up, solemn, the ex parish  church Of St. Peter the Apostle, built during the thirteenth century and more times implied; today the church has a space on three nave moulded from the light and, a simple and lightness frontsided from a church tower built with the local stone of warm colours.

Parish since 1935 the church dedicated saints Cosmas and Damian conserve relics of the village’s patron, noumeros works of sacred art and liturgical  vestements; originally extra moenia, wea reabsorbed into the centre of the village further to the axpansion of the village Orient became in the  second half of the XVII century, period in which began the realization of the palace belonged to the Baron Croce-Nanni, today proudly reworked. 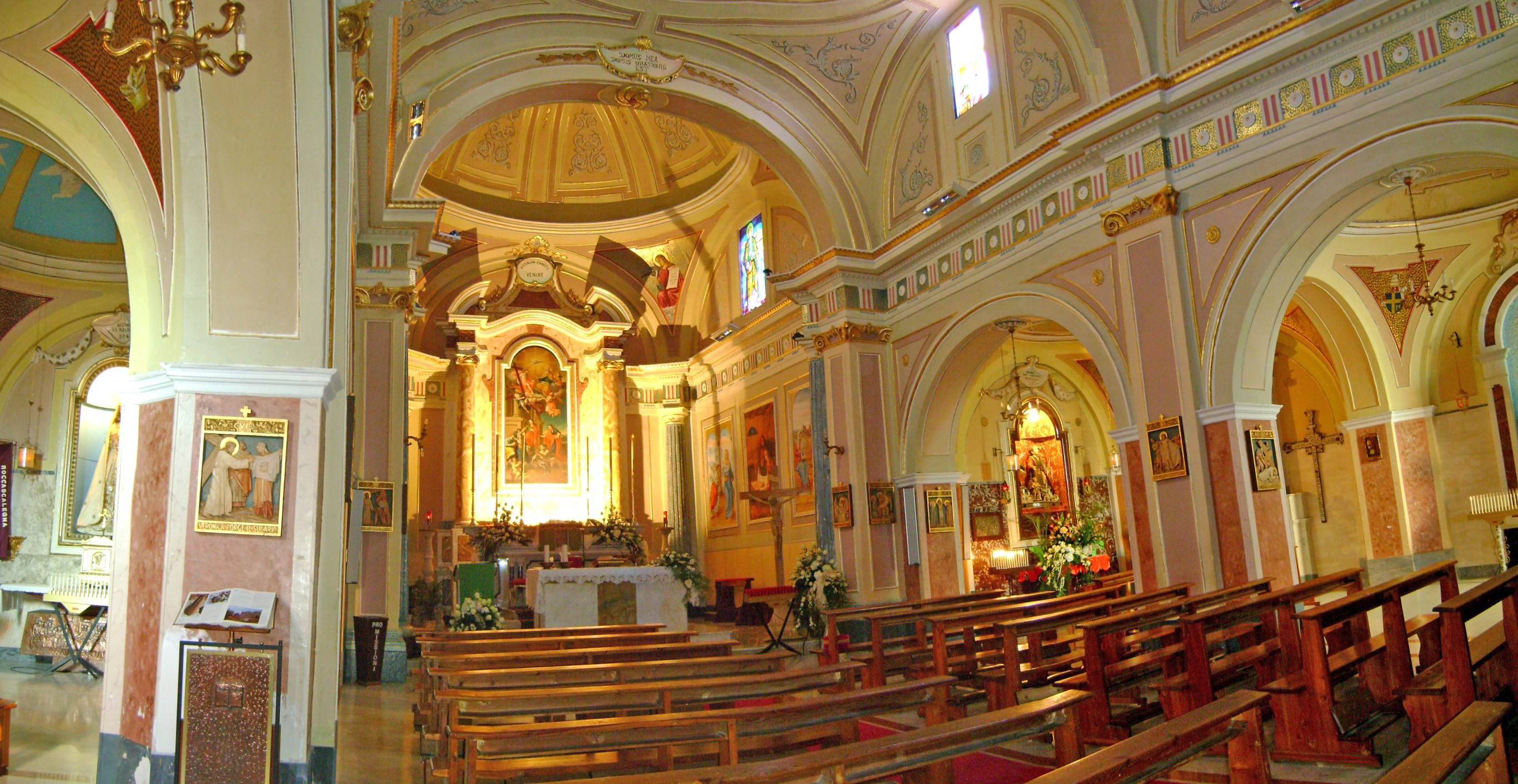 About a kilometer far from the village it’s possible to visit the ancient little church of San Pancrazio, mentioned like the abbey during the year 829, completely restored, it looks to the visitor with a stone solemn front with an horizontal ornaments, side by thechurch tower; It’s possible to gointo  the intern, with two nave, divided from ogival arches, trough a moderate portal architraved with overllok decoration. 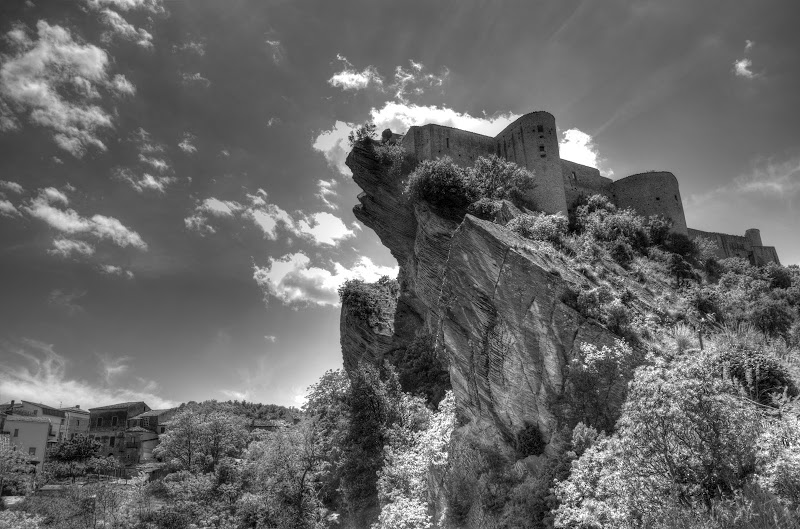 In the communal territory have founded numerous historical-archeological attests that come from the bronze ages in the Lombard epoch. A naturalistic improntace noteworthy are the Gorge of the river Rio Secco into the area recognized from the U.E likes a site of community interesting (S.I.C.). 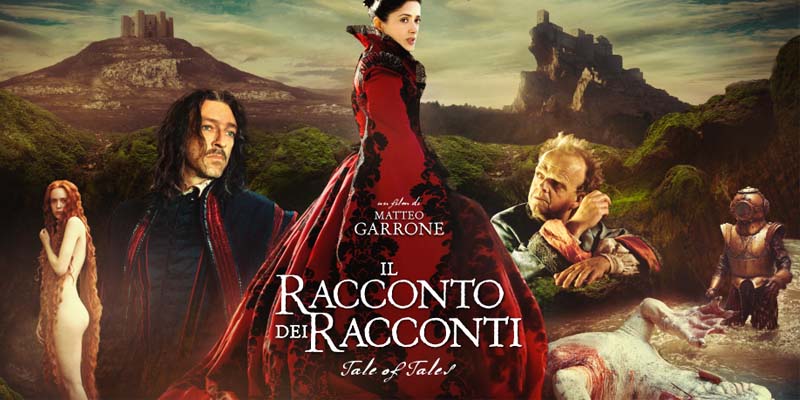 The medieval fortress of Roccascalegna is also known for the shooting of the film Tales of tales, the story of the stories, the latest film from the director of Gomorrah, Matteo Garrone, who will participate at the upcoming Cannes Film Festival.